Houses and apartments for sale : Marathón

USD 591,188
Nearby the sea 4 bedroom maisonette for sale, 194sqm for residential use in Nea Makri. Nea Makri is a town in the East Seaside of Attica. This beautiful residential town is right by Petalioi Bay. Many families choose to live or spend their vacation in Nea Makri as it’s a wonderful area near the sea but also not too far from the city. The area has a lot of green, parks, and playgrounds making it great for families with children but also ideal for older couples looking for serenity during retirement. It can also be a wonderful place for the summer vacation or for weekend getaways. This spacious maisonette covers 194sqm and spreads over 3 floors. It has 4 bedrooms, 2 bathrooms, 1 WC, and 2 living rooms and 2 fireplaces. One of the key features of this beautiful home is the large open space kitchen - dining room - living room on the ground floor that in combination with the stone fireplace makes for the perfect cozy family living room, ideal for game nights as well as having friends over. The property was built in 2001 and it has 3 spacious balconies and a private backyard. The backyard can host family BBQs and is great for kids to play at before or after their swim at the beach that is less than a 1km away. The maisonette has unobstructed views of the area and Petalioi bay. The rooftop of the property can also be turned into an amazing resting area for relaxation and drinks under the sun with a perfect view that nothing can block. The property is located in a residential and family oriented neighborhood and is surrounded by a lot of green. It has 1 parking spot within the premises and also one storage room. This amazing home can be both used as a vacation home and as a main residence. The running costs for this property are 30 euros for water, 120 for energy and 500 euros for the ENFIA tax. This is an amazing investment opportunity in the wonderful area of Nea Makri. It can become the perfect home to a large family that will enjoy amazing moments during the summer months near the sea in a spacious property. See all the details of the property in the 3D & Drone Video! Go and bid for it!!
4 bd 2,088 sqft Marathón

USD 1,170,552
Detached house 450sqm on a plot of 1060sqm with a frontage of 40m, the house consists of three levels plus an attic which are shaped as follows: 1st level with living room and kitchen, 1 bedroom with its own bathroom, utility room with bathroom, wc, storage room with water tanks, storage room with burner, closed garage for 4-5 cars. 2nd level central living room with fireplace, dining room, separate kitchen area, second living room, dressing room, wc, reception area. 3rd level 3 master bedrooms, one of which has a fireplace Attic with living room, 1 bedroom, bathroom. In the house there is a pool of 35sqm with covered living area with kitchenette and bbq, elevator the plot is located 200m from the sea, it is the last of the road the sea view is not obstructed by anything, landscaped with stone, east, excellent spot with lots of greenery. For more information call us at ... or email us at ...
5 bd 4,844 sqft Marathón USD 70,943
For sale a plot of 3000 sq.m. at Varnava, prefecture of Attica. With panoramic mountain and sea views. The area has a very good climate and fresh air! It is not buildable at the moment, but a trailer or a prefab can be placed to be used as a holiday house. It is also suitable  for use as a vineyard. It is located 2 km from the main square of the village, 30 km from the Acropolis-Athens, 33 km from the airport. There are also 2 nearby beaches, Varnavas beach 10 km and Agios Apostolos beach 10 km. The price is € 60.000, negotiable.
32,292 sqft Marathón USD 147,797
For sale a plot of 313 sq.m., within city plan in Nea Makri, Attica. Construction permit fot 225 sq.m.  The plot located  in a beautiful residential area, with nice neighboring villas and permanent residents. It is 1 km from the sea and the beach of N. Makri. Price 125,000 euros. Nea Makri is a town in Northeast Attica and belongs to the municipality of Marathon with which it borders. Its population is about 15,000. The area is very close to Eleftherios Venizelos Airport (12 km) but also to the center of Athens (35 km). To the west is a mountain (the Pentelic Mount) and  sea coast in length of 10 km (South Evoikos) It provides its residents with all the comforts as there is a full market with clothing, footwear, furniture, Super Market, but also very nice Restaurant, café etc.
3,369 sqft Marathón USD 224,651
For sale unfinished maisonette of 480 sq.m. on the plot of 1500 sq.m. in Ag. Anargyri, Kapandriti, Oropos. The property is part of a residential complex. The residence is overlooking the Euboikos and the lake of Marathon. 5 minutes from the center of Kapandriti for super market, bakery, pharmacy, butcher shop, and 20 minutes from Agios Apostolos, coastal area. The maisonette consist of 4 levels – basement, ground floor, first floor, second floor. There is a central heating system, indoor parking for one car, open parking for many places, 2 storage rooms, drilling and underground water tank, barbeque, garden bar, separate entrance to the house. Large basement, ground floor with kitchen, large living room, fireplace and bathroom, first floor with large living room, fireplace, WC and a large room and second floor with 2 bedrooms and a bathroom. The rest of the maisonettes have a family that visits the residence usually at weekends. Price 250.000 euros
3 bd 5,167 sqft lot 16,146 sqft Marathón Amazing Land Development Opportunity Kato Soulion Marathon Greece Euroresales Property ID – 9825218 Property information: For sale is these three adjoining plots of land, situated in Kato Soulion, Marathon, Attica, Greece. Kato Souli is a village in Attica. Some of the nearby villages are; Marathon, Schinias, Agia Marina, Grammatiko, Nea Makri, Agios Andreas and Mati. These plots of land are bordered with the following roads; Frixou, Skra and Lanakos. Each plot is 889.17sqm in size and being sold for 80,0000E per plot. Points of interest: The Soros, a tumulus (Greek Τύμβος, tymbos, tomb), or burial mound, erected to the 192 Athenian fallen at the Battle of Marathon, is a feature of the coastal plain, now marked by a marble memorial stele and surrounded by a small park. Kato Souli Naval Transmission Facility with its 250-metre (820 ft) tall radio mast, the tallest structure in Greece. These plots of land can be used for a great development opportunity in Kato Soulion, Marathon, Attica, Greece. Other Information: Plot 1 – 889.17 - E80,000 Plot - 889.17 - E80,000 Plot - 3 889.17 - E80,000 About the Area: Marathon is a town in Greece and the site of the battle of Marathon in 490 BC, in which the heavily outnumbered Athenian army defeated the Persians. Legend has it that Pheidippides, a Greek herald at the battle, was sent running from Marathon to Athens to announce the victory, which is how the marathon running race was conceived in modern times. Attica Region is an administrative region of Greece, that encompasses the entire metropolitan area of Athens, the country's capital and largest city. The region is coextensive with the former Attica Prefecture of Central Greece but covers a greater area than the historical region of Attica. Attica is the only region in Greece with a GDP per capita higher than the average of the European Union. Despite that, the unemployment rate stood at 21.6% in 2017. Contact Euro Resales Ltd for more information. If you need to buy or sell property in Greece fast contact us today.
9,569 sqft Marathón 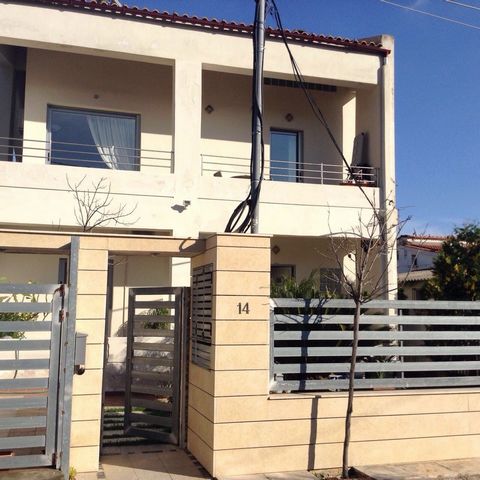 USD 307,418
Detached house for sale in Nea Makri, Erithros with a total area of 220 sq.m., located on a plot of 325 sq.m. The mansion consists of two independent dwellings. The house consists of three levels. Semi basement 35 sq.m., high ground floor 75 sq.m. and the first floor is 110 sq.m. The house was built in 2006. In the basement of 32sm, half place in the ground there is a storage and an ideal place for making wine and homemade products like cheese. With 2 windows and one small door ready electrical phone and bell wires, can be a small apartment as well. The ground floor home is 75 sq.m. with 2 bedrooms, a bathroom and a joined kitchen with living room. Bright, shiny with modern and useful systems for storage all made by expensive german mechanism of “Mobel Art”. In the fist floor there is a two leveled loft. 64 sq.m. of living room with a ceiling filled with 60+ mini lamps giving the sense of horizon in nights. In daytime the sun travels around the home from east to north and finally to west giving light and warm from the 4!!!balcony doors in east and west and and the northern window. Both balconies provide some seaview and endless to the mountains. In the living room there is a large fire place The kitchen is small but ergonomic to place a big refrigerator and a dishwasher. A wooden pass can be used even for daily meals. The small wc have an builded inner place for summer fast refreshing douse. On the upper level of 44sq.m there is the big master bathroom with a fine jacuzzi that works for oxygenated therapy and hydro and aero therapy as well. The floor and the walls are covered with Granite and the toilet equipments are from Italian porcelain. The rest of the floor is wooden as the shilling as well. There are two rooms one used as bedroom and the other as a studio because of the rooftop window. From the balcony of the studio room you see the leaving room and the fireplace in special. Marble of Egypt, Californian and pink marble used for fireplace and the exterior fence. Thick materials of aluminum and with double glasses for all doors and windows. The home is surrounded from the three sides with garden. There are two open parking spaces and verandas in allsides of the both floors. Two extra storage rooms. Price 260.000 euro, bargaining is possible
5 bd 2,368 sqft lot 3,498 sqft floor 3 Marathón

USD 461,126
This fabulous Greek villa is for sale in the Neos Voutzas area in the region of Attica. It was designed by an architect and has exceptional panoramic views of the sea. The property is in a great location close to the airport and the port of Rafina and with easy access to the highway to Athens.This is a 4 storey villa with 450 sqm of living space and 2 balconies to the front of every level. On the ground floor is a garage with room for 3 cars and a storage room, on the first floor is an apartment and the second and third floor make up the second apartment. An elevator connects all floors although the apartments can be used separately if the buyer wishes to rent one of them. The first apartment has an open plan living room with a fireplace, a dining area, kitchen and a small storage room. There are 2 bathrooms and 2 bedrooms with a walk-in closet.The second apartment is 2 storey and the first level has high ceilings and marble floors. It features a spacious living room with dining area and fireplace, a large kitchen, a bathroom and a loft between the first and second level. Upstairs there are 3 bedrooms, 2 of which have their own bathrooms and walk-in closets.The villa sits on 1,000 sqm of land and the gardens are accessed from the first and second floors and the third floor has access to a large terrace. Both the gardens and terrace enjoy breathtaking views of the sea which is only 4 kms away. The port of Rafina is 6 km away and is perfect for excursions to the Greek Islands.A fabulous opportunity to buy a villa in Greece with great rental potential!!
5 bd Marathón
Create a property alert
Your search criteria:
FRANÇAIS ESPAÑOL PORTUGUÊS POLSKI NEDERLANDS ROMÂNĂ
ITALIANO ENGLISH DEUTSCH SVENSKA РУССКИЙ