Houses and apartments for sale : Russia 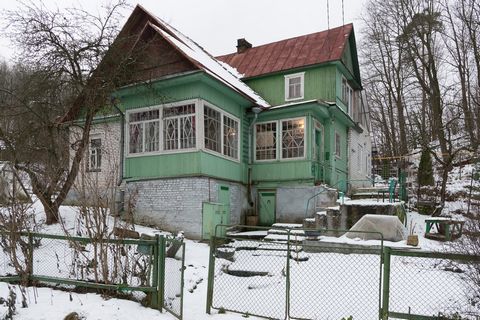 Unique land in a natural reserve with a Beautiful house for sale in Saint Petersburg, Krasnoselskiy district.

Excellent resort in a natural reserve, with its own microclimate. Natural sources of mineral water. It’s situated in a picturesque location near the Dudergof reserve. The roads are in a great state with a good lightning, all the infrastructure is urban! Shops, post office, school, kindergarten, playground, tennis courts, near the Orekhovaya and Voronoya mountains. Near the only lake allowed for swimming in the Leningrad region. With golden sandy beaches. 2 km from the ski complex "Tuutari Park". The zone known as the Petersburg Alps. Historical place associated with the birth of Russian aviation (first flight). Distance to: Train station: 10 min walk. To the center of Red Vila: 10 min. by car. To Veteran avenue and Avtovo metro stations: 30 min. by bus To the city center and the metro station "Baltic Station": 40 min. by train. Mozhaiskoe is included in the administrative boundaries of St. Petersburg, so the registration and all benefits are from St. Petersburg. Living area: 99 m² Total area: 166 m² Plot: about 8 acres Year Built: 1962 The garage is made of brick, there's a pit for repair and an utility room. Electricity, water supply, sewerage (sewage). Natural gas at the border of the plot. The house still has bottled gas. Heating throughout the house (therefore the second floor is residential even in the winter). Coal heating (boiler in the basement). After installing the gas system, the boiler can be replaced by a gas one. Shower stall. Hot water (column) in the kitchen and in the shower. City phone. Internet. Two attic rooms (you can make a bedroom). Panoramic views from the windows of the second floor. There are two apple trees on the plot as well as others fruit trees. Sauna (requires repair). Two floors: on the ground floor, a bedroom, a dining room with an adjoining veranda (in the summer the branches of an apple tree fall directly onto the table), a kitchen, an entrance hall between the kitchen and the rooms, a canopy, an entrance hall with a staircase to the second floor. On the second: a long beautiful corridor, three bedroom rooms, 2 utility attic rooms (you can make bedrooms or dressing rooms). High ground floor: studio/atelier, toilet, storage room. There's a possibility to turn all these rooms to bedrooms (2-3). The plot is uneven, as the house is located at the bottom of the Voronya mountain, which gives it a special charm: you can make picturesque landscape compositions, flowerbeds, alpine hills. There are a few greenhouses. In fact, this house is half a large house, which is not felt at all, since it is angular. Neighbours (very decent people) only from the back of the house. Excellent air, dry area, without any flooding, resort place, near mineral springs. The house is based in Mozhaiskoye, Krasnoe Seloe, St. Saint-Petersburg, Russia. Located in a picturesque location, close to the Dudergof nature reserve. Selling directly from the owner. All documents on the property (plot, house) are available. Owned for over 10 years. By agreement, the intermediary is paid a percentage of the transaction amount.
4 bd 1,066 sqft lot 8,396 sqft Krasnoye Selo