Shop in the condominium Varandas do Guadiana.

Shop in the condominium Varandas do Guadiana.

USD 88,158
Shop for sale in Vila Real de Santo António, on Avenida da República. Property with 31.4sqm, with 1 living room, pantry and bathroom. Parking space is available in the garage. Ref. : 4433 Vila Real de Santo António is a Portuguese city in the District of Faro, region and sub-region of the Algarve, with about 11,900 inhabitants. It is the headquarters of a municipality with 61.25 ksqm of area (Source: INE) and 19,156 inhabitants (Source: INE/Censos 2011), subdivided into 3 parishes. It is one of the few municipalities of Portugal territorially discontinuous, [1] dividing into a western part, the parish of Vila Nova de Cacela, and an eastern part, where the city and Monte Gordo are located. The eastern part is bordered to the north and west by the municipality of Castro Marim, to the east by the Guadiana River, which defines the border with Spain, municipality of Ayamonte, and to the south has coastline in the Atlantic Ocean; the western part is bordered to the north and east by Castro Marim, to the west by Tavira and to the south it has coastline in the Atlantic Ocean.
334 sqft Vila Nova de Cacela

Nepalese, Indian and Other Clothing and Clothing Store for Trespass. Excellent location. Busy street with lots of commerce. The Sale of the trespass is done with all the stock. Shop to Operate on the main avenue of Monte Gordo Beach. Open all year round. Pigs meters from Monte Gordo Beach. Your business on the beach. Book your visit. Energy Rating: D #ref:CS-LOJ-83552
1,076 sqft lot 1,292 sqft Monte Gordo

USD 205,500
House V2 w/basement in Vila Nova de Cacela for sale. The villa has 3 floors: a large basement, which can be transformed into a 3rd bedroom, has on the ground floor a kitchen equipped with 2 machines, refrigerator and microwave, oven and electric hob, extractor hood and water heater, a room with lots of light and a WC service; Has on the 1st floor 2 bedrooms with wardrobe and balcony, a bathroom with bathtub and wall heater. The house has pre-installation of air Cond. And also has a terrace with shower and Barbeque with connection to the room. Situated in a very quiet area of the village, this villa is a few meters from the center, all services and access points to all means of transport. It is about 1,500 m from the beach of Manta Rota.
1,184 sqft lot 700 sqft Vila Nova de Cacela

USD 346,553
Semi-detached house consisting of ground floor and 1st floor, with patio and barbecue.This house is located in Manta Rota and is composed on the ground floor of: garage box, kitchen, bathroom, living room, kitchen, and patio.On the 1st floor has 2 bedrooms with fitted wardrobes and 1 bathroom.The attic has 2 storage spaces as well as a terrace. It is possible to access the patio and barbecue through the room.Manta Rota belongs to the parish of Vila Nova de Cacela and the municipality of Vila Real de Santo António and is, in recent years, one of the most sought after beach destinations in the Algarve, while retaining its traditional character and originality.Whether for main housing or for renting, this villa will meet those who want proximity to the beach and the tranquility of this location.We invite you to know!
1,615 sqft lot 969 sqft Vila Nova de Cacela

USD 249,275
Villa is located in Recanto do Sol which is located in Vila Nova de Cacela, which is in the district of Vila Real de Santo Antonio, an area where you can enjoy numerous beaches, commerce and traditional restaurants.Ground floor composed of a large living room, 1 bathroom, storage, kitchen with access to the Patio with BBQ and Shower and Patio at the entrance of the Villa.1st Floor composed of 2 bedrooms one of them in Suite with Balcony and 1 Bathroom..We help with the whole process! Contact us or leave us your details and we will contact you as soon as possible!Quinta da Ria and Benamor golf courses are just five minutes away.The complex consists of 20 two- and three-bedroom houses, built with different designs, many with a private outdoor pool.The Houses also have gardens and a private underground garage. All have fully equipped kitchens, double glazing in all windows, safe and air conditioning as standard.There is a local post office and a grocery store within walking distance, and you will find many restaurants and shops nearby in Mante Rota, which features a stunning sandy beach.The lovely town of Tavira is just a 10-minute drive away.
797 sqft lot 936 sqft Vila Nova de Cacela

USD 413,432
Villa V3 + 1 high quality in Manta RotaVilla with excellent finishes, equipped with air conditioning, solar system for sanitary hot water and appliances in the kitchen.It features a patio with barbecue facilities, a countertop with a dishwasher and a shower.Incorporated in the 0 floor by a huge living room, equipped kitchen and bathroom and patio, garage.The 1st floor has three bedrooms one of them en suite, bathroom. In the attic there are storage rooms that can be another room and a terrace.
1,453 sqft lot 2,540 sqft Vila Real de Santo António

USD 105,790
STORE is in the Urbanization of Manta Rota with 157.35m² with generous showcase and lots of natural luminosity. Situated 500 m from manta rota beach. Consult us for more information.
1,690 sqft Vila Real de Santo António

USD 103,358
Shop for trespassing in the main avenue of Vila Real de Santo António.Loja currently operating with privileged location. Shop facing the Guadiana River, has two entrances and 20m2 of awning area abroad. In good condition, this store has 73m2 and is ideal for your next business. Contact us for more information or to schedule a visit. (ref:C0358-00461)
786 sqft lot 786 sqft Vila Real de Santo António

USD 139,837
Shop located in Monte Gordo, in the 2nd line of the sea, prepared for coffee or similar activities. It previously worked as a snack bar. You can choose another type of activity. Very well located, easy access and parking nearby. Make an already set up your visit. (ref:C0254-01287)
lot 657 sqft Monte Gordo

Commercial space for lease with option to purchase with 120 m2 in Vila Real de Santo António. 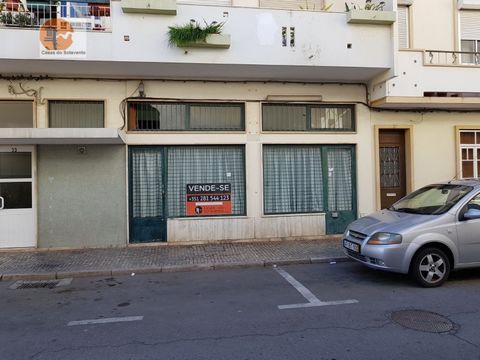 Store located in Vila Real de Santo António, close to the center, ideal to open your business. This property, once was once a, coffee, has 2 WC's, 1 1 kitchen type space. Ideal for offices, gym, seen space have generous areas. This property, at this moment is full of things that are to withdraw, will be sold empty. Mark your visit now. We await you! Energy Rating: C #ref:CS-LOJ-61096
1,076 sqft Vila Real de Santo António Commercial space is sold in Vila Real de Santo António, close to the market and with all kinds of commerce and services in the surroundings. With 2 entrances this space has 234m2 of gross area. Excellent for catering or any other business, for its fantastic location. Energy Category: C Energy Rating: C #ref:CS-COM-66953
2,519 sqft Vila Real de Santo António
Create a property alert
Your search criteria:
FRANÇAIS ESPAÑOL PORTUGUÊS POLSKI NEDERLANDS ROMÂNĂ
ITALIANO ENGLISH DEUTSCH SVENSKA РУССКИЙ